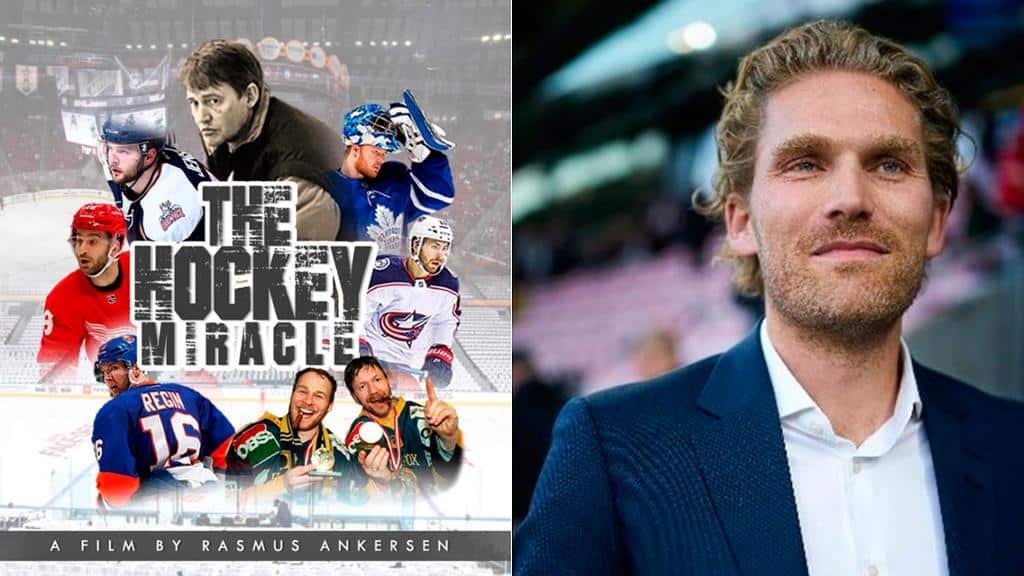 For over 10 years, Rasmus Ankersen has studied some of the best talent in the world, mainly drawing distinctions between the high-performance of football teams (2 of which he manages) and high-performance in the organisations and in the team. Unbeknownst to Rasmus for many years was the phenomenal level of talent in the small, modest town where he grew up.

Herning, Denmark, is rarely mentioned when it comes to hockey hotbeds, but after the town of 50,000 has sent five players to the NHL over the past decade, a local filmmaker is trying to change that. Herning, located in the Central Denmark Region of the Jutland peninsula, a three-hour drive west from Copenhagen, is the home of Toronto Maple Leafs goalie Frederik Andersen, Detroit Red Wings forward Frans Nielsen, Columbus Blue Jackets forward Oliver Bjorkstrand and former NHL forwards Peter Regin and Nicklas Jensen.

Rasmus Ankersen decided to tell the story in “The Hockey Miracle in the Middle of Nowhere,” which premieres Wednesday. The 37-year-old, who really is more into soccer than hockey, is also from Herning. Now living in London, but was intrigued enough in his hometown’s hockey acumen to document it despite the commitment he has in managing two football teams already.

“I have always been interested in winning cultures, how you build them and I wrote a few books about that,” Ankersen said. “I published a book back in 2012 which was called ‘The Gold Mine Effects.’ That book proved part of Ankersen’s inspiration for the film, which he discussed in the following Q&A session with Peter Ekholm of NHL.

Where did you get the idea of making this movie?

“My book was about the crust effect that the best athletes tend to come from the same small places. I realized that some of the best sprinters came from the same athletic club in Kingston, Jamaica. The best female golfers came from South Korea, and there is even Tarnaby, in northern Sweden, where some of the best alpine skiers in history are from. So I was looking into this, and then I traveled around the world for six months to train and live in those hot spots to try and understand the secrets and also if it’s possible to replicate them. The book was published in 2012 and I’ve done a lot of speaking about it for companies around the world.

“A couple of years ago I was back in my home town and I met with an old friend. We spoke of the concept. And he said, ‘You should really look in to your own hometown.’ He is a little bit older than me and he told me that there was a backyard in the 60’s and 70’s, where hockey really started to become popular. And eventually a lot of the players that won the first championship for Herning in 1973, they kind of came from that backyard. And I looked into this and I was able to track that throughout generations and to those NHL players that Herning produced. I traveled around the world to find those gold mines and then I found one right on my doorstep. This was maybe the most impressive one of all of them.”

What have the players meant for Herning as a city?

“It’s a kind of a very down-to-earth town. People don’t get too high or too low. These guys are just ‘Herning boys.’ They come back to skate there in the summer. I think even that some of them will move back to Herning after they have finished their careers. They are not treated like superstars but that’s more of an expression of the mentality in the town. But I don’t think people in Herning actually understand how sensational this is. If you look at it at a per capita basis, it’s unreal. It would be difficult to find. It’s not just the five NHL players, that’s obviously the peak, but they have produced so many other players that played in Germany and Switzerland. When Denmark hosted the Worlds in 2018, 40 percent of the Danish team were Herning boys.”

What has been the most difficult part about making this movie?

“It’s been to understand the historical monument of the story. I have been deep down in archives to find the old way to the actual film. I don’t want to bore the North American audience with details of the championship back in 1973, but I think it’s been really interesting for me to understand. I almost drew a family tree, and when I did that, it’s almost like a small family within the town. So understanding that bit of it and understanding how hockey actually got popular and became the town’s identity. Because today it’s more about soccer there, really. When my dad came to the city back in the 70’s it was a hockey town. Everyone played hockey. When you are in it, you don’t realize it. But it was a real hockey culture there.”

How did you manage to make the film? The players live all over the world.

“I had three different production companies helping me. I did all the recordings in Herning. I had a local company helping me with the filming. But when I was in North America I used local guys there. I have been traveling a lot; to Helsinki to meet Nicklas and Peter who play there now. Freddie Andersen was back for holiday in Herning when I spoke to him. Really, I’ve been around doing this. It’s taken a couple of years. I haven’t been able to focus just on this. I’m trying to explain why it happened, but also giving ideas on how it can be replicated. A big part of my story is my meeting with this professor in Canada who started a study on birthplace effects. Basically he found out that small places are better than big cities at developing talent. If you grow up in the U.S. for example, and in a town with between 50,000 and 100,000 inhabitants, you are 18 times more likely to become a top player than if you grow up in a city with more than 500,000 people. There are some things in the environment in small towns that are more efficient. And Herning is around 50,000, so my question is, ‘is Herning the poster boy for this theory?’

How well do you know the players?

“I know them from the town. We grew up in the same town. I wouldn’t say they were my friends, but I knew them. I probably played hockey with them on the street. Frans is one year younger than me, we have common friends. Peter Regin and I have common friends. Freddie, Nicklas and Oliver are a bit younger so I didn’t have as much in common with them when I grew up. But it’s the same circles.”

To book Rasmus Ankersen for your next online event, contact Front Row Speakers on +353 1 485 3991 or email [email protected]