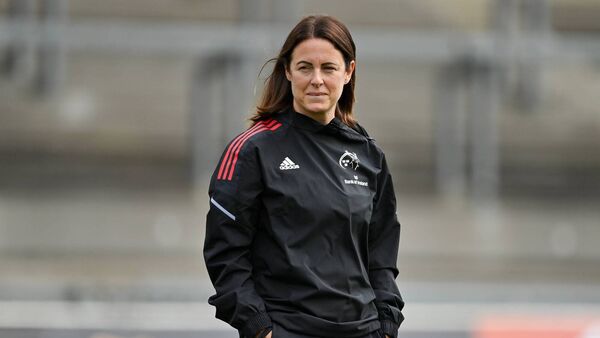 Munster back rower Jack O’Donoghue says that Limerick hurling psychologist Caroline Currid is a significant addition to their backroom team and he’s looking forward to working with the Sligo native as they bid to end over a decade without silverware.

Currid has taken up a part-time role with Johann van Graan’s squad and will be hoping to transfer the remarkable run of success she has had with GAA teams into rugby.

Limerick hurlers hope to have Currid on board as they bid for a fourth Liam MacCarthy Cup success in five years in 2022, with the sports psychologist having enjoyed All-Ireland success with teams from all four provinces.

Aside from her success with John Kiely’s men, where Limerick hurlers have hailed her massive input, Currid also helped Tyrone to their 2008 All-Ireland success, Tipperary hurlers in 2011 and Dublin footballers the following season.

“She’s only new in the door. We are in awe of her, she has an incredible CV and we are all really looking forward to working with her as a team and as individuals,” said O’Donoghue.

“It’s still early doors yet and I suppose maybe after the first few games we will sit down and we will talk about some of the fundamentals and values that she feels are really important for a high performance team and, look, to be able to take anything off an All-Ireland winning team will be great and to use some of their values maybe but it’s still early doors where we haven’t done too much work with her yet, but really looking forward to it,” said the Waterford native.

O’Donoghue, who has now amassed 140 appearances for Munster, was a promising young hurler with De La Salle College and the Ballygunner club before concentrating on rugby, might be tempted to pass on a few secrets to Waterford manager Liam Cahill but he reckons he doesn’t need them.

O’Donoghue has been impressed by what Currid has achieved but he’s not sure if mental preparation has been the missing link in their quest for glory in recent years.

“I don’t know if that is the bit we have been missing. We have had psychologists in before and I suppose a big thing we missed last year was that with Covid we couldn’t have someone in here on a regular basis to be able to talk to.

“And, as you know, doing Zoom calls and things is just not the same as face-to-face and you don’t get the sense of someone’s body language or the emotions and stuff like that. To be able to sit down with her, she can see stuff in training or from games live and she can pull you aside for a chat straight away after. And that’s going to be a huge benefit to us.

“It’s exciting, she has an incredible CV and we are excited to learn from her.”

Munster head coach van Graan is delighted to have Currid on board and has been impressed with what she has achieved.

“Caroline is a consultant with us. She is in for a few days a week. She’s done excellent work with other teams, she’s working one-on-one with a few of our lads and it’s great to have her involved. Pieter Kruger previously worked with us from South Africa and was involved with multiple teams, but because of Covid he could no longer fulfill that role, and we looked around in Ireland.

“It’s such a need, not only the mental well-being of your players but also the sports psychology piece. She’s very good at what she does and it’s great to have her as a consultant and part of our group.

“Look, every team looks for more inches across big games and it’s not a new role that we created. It’s not something new, it was fulfilling a role that could not be fulfilled by another individual so like I said it’s great to have her involved. It’s a new way of thinking, a new way of doing things, but she’s part of our staff and like all of our staff she contributes a lot, and it’s great to have her on board.”

To book Caroline Currid for your next online event, contact Front Row Speakers on +353 1 485 3991 or email [email protected]