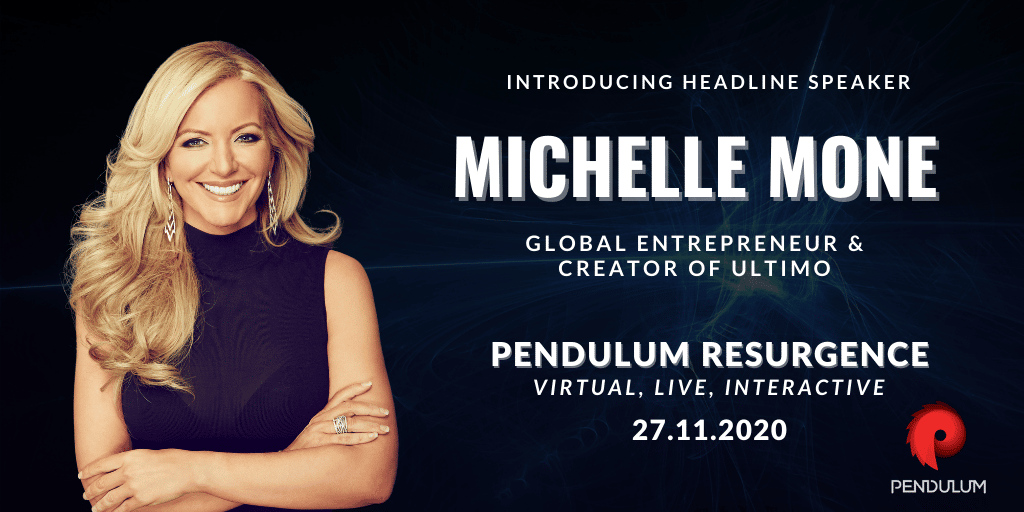 We are thrilled to announce that Baroness Mone of Mayfair OBE (Michelle Mone) will speak at ‘Pendulum Resurgence: Emerging From Disruption’ a revolutionary business, leadership and well-being virtual event designed to help organisations thrive during these radically disruptive times.

On November 27th, 2020, we will unite the business world for a one-day virtual extravaganza with world-class speakers delivering on topics such as remote leadership, organisational resilience, leading through disruptive times, business agility, communication, the future of work and more.

Baroness Mone of Mayfair OBE is renowned as one of the UK’s most influential ladies. The multi-award winning Entrepreneur-turned-Parliamentarian is now Start-Up Business Tsar to the British Government and advocate for female equality in business.

Founder of Ultimo Brands International, the UK’s leading lingerie brand for the last two decades, she set out with a vision of helping woman look and feel their very best. It was upon that simple concept Lady Mone built her career and influence, being honoured with a Life Peerage to the House of Lords by the Prime Minister and an OBE from Her Majesty the Queen for her outstanding contributions to business.

The Baroness grew up in the impoverished East End of Glasgow when, at the age of fifteen, her father fell ill and was subsequently declared paraplegic and wheelchair bound for life. This forced Lady Mone to leave school without any qualifications in search of full-time employment, sparking her instinct for entrepreneurship. At the age of just 22, Lady Mone excelled herself to Head of Sales and Marketing in Scotland for the Glasgow-based Labatts Brewers. Unfortunately, being made redundant after two short years.

In 1996, after only six weeks out of work, Lady Mone was at at a dinner dance wearing a very uncomfortable cleavage-enhancing bra. It was here the Baroness had an epiphany on what the lingerie industry was missing, and the world-famous Ultimo bra was born.

After the launch of Ultimo, Lady Mone quickly established herself as one of Scotland’s finest exports, winning the World Young Business Achiever Award in 2000 at the Epcot Centre in Florida, as well as Business Woman of the Year at the Corporate Elite Awards in London. Lady Mone’s status as one of the UK’s leading entrepreneurs was confirmed soon after when Prince Charles invited her to join the board of Directors for The Prince’s Trust.

In October 2005, Lady Mone attended a speaking event with former US president Bill Clinton and Mikhail Gorbachev, leading to her involvement in setting up the Women’s Enterprise Project in the Middle East in support of The Sultan of Oman. It was then she began to realise that her experiences and wisdom could transform lives and inspire others in the face of adversity.

Despite facing a challenging few years in her private life, suffering an acrimonious divorce and battle to retain her business, Lady Mone is now one of the United Kingdom’s most notable global speakers. The Baroness has inspired, coached and mentored audiences and individuals in over 50 countries over the last two decades. This culminated in her being given a Life Peerage in 2015, then being asked by the Prime Minister David Cameron and the former Secretary of State for Work and Pensions, Iain Duncan Smith to conduct The Mone Review; an insight into helping start-up businesses in deprived areas.

The proud mother of Rebecca, Declan and Bethany has now sold Ultimo to global lingerie giants MAS Holdings – one of the world’s largest manufacturers of intimates, with a $1.4 billion turnover and 63,000 employees. A truly inspiring story, Baroness Mone has now revealed all of her struggles and successes in her autobiography: “My Fight to the Top”, which has ranked at number one in three Amazon Charts.

One of the United Kingdom’s most decorated Entrepreneurs, Michelle is a shining example of how flair and true grit can lead to global success.