Home > News > Why You Might Not Have Heard of the Guru 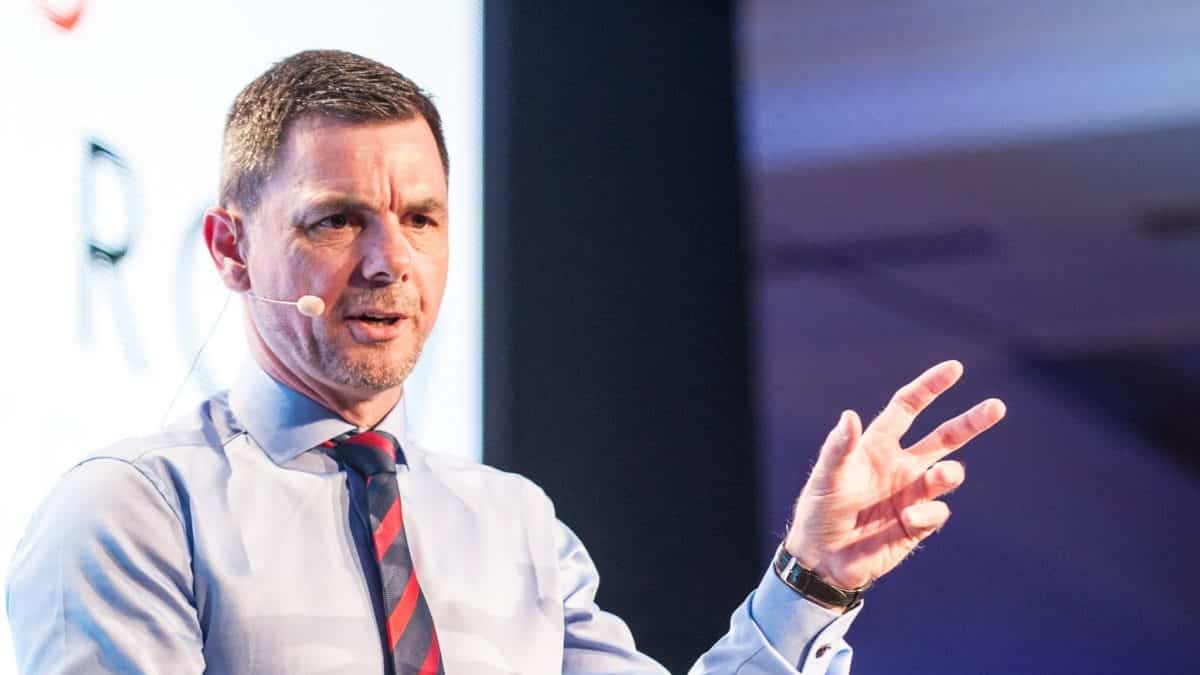 Why You Might Not Have Heard of the Guru

Gary Keegan has been able to inspire boxers, sailors and rugby and GAA players with his unique thinking on high performance.

Jim Gavin never mentions Gary Keegan. In a world of casual revelations their relationship is conducted behind a curtain. It is how they like it. About an hour after Dublin won the 2017 All-Ireland final Gavin re-appeared on the pitch for a group photo with 22 other members of his back room team, from the yoga teacher to the lifestyle coach. But there was no trace of Keegan: he is never name-checked in Stephen Cluxton’s broad-brush victory speeches or lionised in player interviews. Though they must know that others know they prefer to treat it like a secret.

On the website for Uppercut, Keegan’s consultancy company, there is a small break in the silence. A page for testimonials from his clients is led by a paragraph from the Dublin football manager that runs to 144 words, trembling with praise and gratitude. “Gary has made a profound impact on Dublin GAA football,” it begins. “He is a transformational leader in the truest sense, acting with integrity, encouraging innovation and he has an innate ability to inspire. The biggest compliment that I can pay to Gary is that he has led a mindset shift enabling us to create a powerful pathway in what we do and how we do it.”

On the main stage at the 2018 Pendulum Summit Keegan hosted an interview session with Paul O’Connell and Bob Rotella, golf’s leading sports psychologist. In his preamble Keegan said that he had been “under the radar” for the previous year while he established his new company. In his line of work word of mouth is the host broadcaster. For all of the success Keegan has enjoyed mainstream fame has never alighted on him. He didn’t seek it out, he didn’t miss it. Smart people tended to find him.

Over the last 15 years Keegan has been a relentless force for good in Irish sport. Follow the scent from Olympic boxing to the Dublin footballers to Leinster Rugby to the Cork hurlers and heaven knows how many other teams and sportspeople who needed a little of him to make more of themselves.

When Annalise Murphy won silver at the Rio Olympics Keegan had been the angel on her shoulder for 12 months. Outside a small circle nobody knew. At the time Keegan was head of the Irish Institute of Sport and Rory Fitzpatrick, sailing’s high performance manager, had known him for years; during the long lead-in to the Games Fitzpatrick reached out to him.

“He has the best sporting intellect of anybody I’ve come across. It takes a huge amount of leadership to do what he’s done in sport. When you’re around him you can always feel it. He’s the kind of person you want to work for, that you’re happy to work for. You want to do your best for him.”

Anthony Daly scarcely knew the name when he was first introduced to Keegan in 2013 but he knew enough to push it
further. Dublin’s hurlers were about to embark on their best summer in over half a century and Daly was looking for an edge anywhere he could source it. Keegan agreed to meet Daly and his selector Richie Stakelum in his office in Abbotstown.

“We came out to the car about an hour and a half later, myself and Stakelum,” says Daly. “Richie says to me, ‘I don’t know about you Dalo but the sweat is out through me.’ I took off my jumper and there was sweat down the side of my shirt. I said, ‘Holy Christ, the intensity inside in that room.’ A meeting, that’s all it was. Taking us apart about our thinking.”

Keegan agreed to meet the players on the week of the Leinster final but most of his contact that summer was with Daly. He used him as a clearing house for his thoughts. “There were times in 2013 when I would have been worried about this and that and the other and it was a great re-assurance just talking to him. He has an aura about him as well, you know.”

What makes Keegan different? Performance psychology or sports psychology or high performance consultancy is a crowded field and it is not an exact science. Making connections with people in that environment is not something harvested from a manual. In every group there will be a constituency of sceptics, waiting to be unimpressed. But Keegan has a precious capacity to affect people. In his company it is instantly detectable.

In 2015, when Isa Nacewa returned to Leinster Rugby for his second spell, the club were searching for somebody like Keegan. Not just anybody: somebody about whom they could be absolutely certain. Leo Cullen, the Leinster head coach, and Guy Easterby, the manager, led the process but Nacewa was part of it too.

“There was no rush to fill the position,” says Nacewa, “because we knew if we got it wrong it could be very wrong. We scoured Ireland and Europe and a lot of places around the world to find someone that would fit. Somebody of Gary’s calibre is pretty hard to come by. Leo convinced him to work with him a little. Once I got the opportunity to sit down with him it sort of blew my mind. Everything about him just screams high performance. There’s a real hard edge to his outlook. There are no excuses. For us it was the right fit at the right time. We had a younger generation that needed a bit of shaping.”

Keegan started working with the Leinster players in the second half of last season when their pursuit of the Champions Cup and Pro14 double was at full speed. By then he had started his second season with the Cork hurlers. At the end of 2016 he encountered a group of players damaged from a disastrous summer. The general perception was that they lacked leadership and drive. Straightaway he drilled into the group. At the first meeting he asked them to identify their weaknesses. “There was a lot of chatting and brain storming but you hear the same old things,” says Luke O’Farrell. “Then he started giving us skills and techniques. A huge part of it was ownership. The more we talked about it the more we started to understand ourselves. And when fellas started saying, ‘We should do this,’ it was coming from us. You feel then that you have to stand over it.

“He transformed the whole thing. He completely transformed my outlook on hurling. I would say a 360 degree turn. The players have unbelievable respect for what he did. He gave me and all of us strength. I remember [in 2017] I came on against Waterford and I did shocking with the first two balls. But I remember I got an important point towards the end that I knew I wouldn’t have got if it wasn’t for him. The balls I’d messed up would have been too much in my head. He was huge on that: mindfulness and living in the moment.”

In the middle of the last decade Keegan was in a much different place. In 2003 he wrote Irish boxing’s first high performance plan and for the next five years he navigated it through a political landscape that was studded with landmines. Powerful people in his own federation wanted the plan to fail. In the midst of that he still had the courage to take risks.

In the lead up to the Beijing Games he could see that the team had lapsed into an “excuse mentality.” So he took away their Irish tracksuits and replaced them with black garments distinguished only by green piping down the side and a shamrock. The federation was up in arms. He carried on. His thinking was clear.

“We’re not standing up straight in these [Irish] tracksuits” he told the athletes. “We’re not walking with pride, competing with pride. What do we represent as an Irish team? As Irish people? What do we bring to this space? So right now that tracksuit is dark because we’re not sure of who we are. We want to fill this black with green but we’re starting with a very small piece of green.”

By the time the Games came round all of those questions had been resolved. Three medals in the ring was more than Ireland had won at any Olympics since Melbourne in 1956. He had led those boxers on a journey to some place better. Time and again that has been Keegan’s gift to others.

THE KEEGAN EFFECT: SPORTS WHERE HE HAS WEAVED HIS MAGIC

Appointed high performance director in advance of the 2008 Beijing Olympics, Keegan put in place a system that saw Ireland win three medals in the ring in China. ‘In my 15 years on the global circuit of HP [high-performance] sport I’ve yet to meet anyone to compare with Keegan’s ability to lead, strategize and improve performance. Gary employed me as head coach of Irish Boxing [and] we followed Gary’ s vision…which took Irish boxing to amazing success,’ said Billy Walsh.

Brought in to advise Jim Gavin during the period that has seen the county win four consecutive All-Ireland championships.

It was announced in October 2016 that Keegan, who had recently stepped down as director of the Irish Institute of Sport, had been enlisted by manager Kieran Kingston to work with his hurlers. ‘Gary would have done a couple of sessions around the culture and things like that,’ said captain Stephen McDonnell in the summer of 2017 when Cork went on to reach the All-Ireland semi-finals. ‘We used his experience with the boxing and what he has done for them. We talked about self-awareness and knowledge and when you get that, it’s easier to become closer to the people around you’.

At the start of the Rio Olympics in 2016 performance director James O’Callaghan said: ‘We’ve always been clear about our goals. We want to win a medal and, if you look at boxing, it’s a sport that has consistently delivered medals. Gary Keegan played a huge role in the boxing high performance plan and we’ve worked closely with Gary since he moved to the Institute of Sport.’ Annalise Murphy subsequently won a sailing silver for Ireland in Brazil.

As originally appeared in The Sunday Times, April 7, 2019.