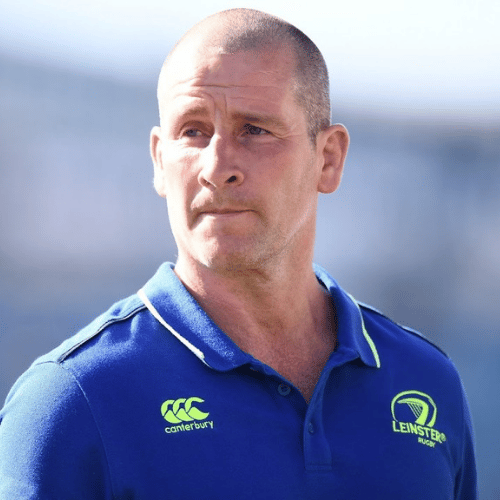 The former Head Coach for the England Rugby Football Union, Stuart Lancaster has worked at every level of Rugby. He took the England Team to the World Cup in 2015 and faced some harsh ups and downs during this process. Learning valuable lessons of leadership, management and identity, he can impart what he has learned from the field onto the boardroom. Stuart is currently coaching in Dublin, Ireland with Leinster Rugby.

Stuart was the first ever player to play more than 100 games for Leeds before taking up a full-time role developing the young players at the club. A level 5 qualified coach, Stuart has been Saxons Head Coach and the RFU’s Head of Elite player Development, straddling all of England’s age group and development sides, since 2008. During his tenure as England Saxons Head Coach the side won nine out of 10 matches, picking up three Churchill Cups on the way (’08, ’10, ’11).

After the 2014 success of the RBS 6 Nations and the Summer Tour to South Africa, Stuart gained an incredible amount of respect and admiration within the rugby community. The RFU reinforced their support for Stuart and his methodology by appointing him permanent full-time coach of the England Elite Squad.

After losing the 2015 World Cup and leaving his position at England, Stuart now coaches for Leinster Rugby in Dublin, Ireland. Learning from his experiences, he can share tips on creating a positive team culture, implementing change within a team, achieving buy-in from players and process vs outcome. The ultimate leadership speaker who has lived through the highs and the lows, Stuart is the perfect keynote for team-focused events.

Stuart has extensive Leadership, Coaching and Management experience and has learned a lots of lessons at the sharp end of Professional Sport that would be applicable to any businesses interested in developing Leadership and understanding the dynamics of teams.

-Building Long Term High Performing Teams
-Lessons learned in Leadership.
-Creating a strong Culture and Identity.
-Learning from Failure and Building resilience.
-Building your Credibility
-Being the best Leader, Coach and Manager you can be.