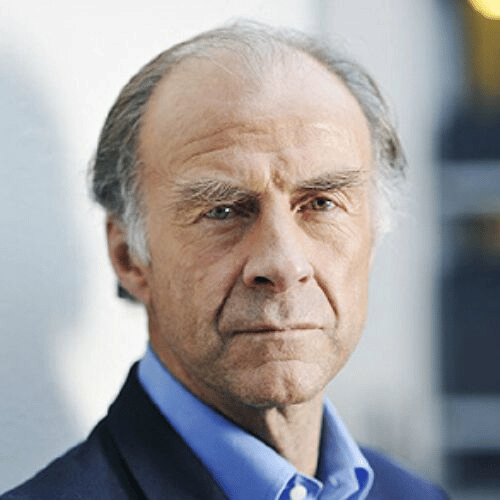 Sir Ranulph Fiennes was, with Charles Burton, the first man to reach both poles by surface travel and, with Mike Stroud, the first to cross the Antarctic Continent unsupported. In the 1960s he was removed from the SAS Regiment for misuse of explosives but, joining the army of the Sultan of Oman, received that country’s Bravery Medal on active service in 1971. He is the only person yet to have been awarded two clasps to the Polar medal for both Antarctic and the Arctic regions. Fiennes has led over 30 expeditions including the first polar circumnavigation of the Earth, and in 2003 he ran seven marathons in seven days on seven continents in aid of the British Heart Foundation, 3½ months after a massive heart attack.

In 1993 Her Majesty the Queen awarded Fiennes the Order of the British Empire (OBE) because, on the way to breaking records, he has raised over £17 million for charity. He was named Best Sportsman in the 2007 ITV Great Briton Awards and in 2009 he became the oldest Briton to reach the summit of Everest, raising a total of £6.3m for Marie Curie Cancer Care. The Coldest Journey in 2014 raised $2million for Seeing is Believing. In 2015 he successfully completed the Marathon des Sables raising over £1 million for Marie Curie.

Ran holds the current world record as being the only person ever to have climbed Mount Everest and crossed both Antarctica and the Arctic Ocean via the Poles.

He has written 23 books, the latest Cold came out in 2013 and his latest book Agincourt was published in September 2014. His latest book, ‘Heat’, will be released in October 2015. He is described by The Guinness Book of Records as “the world’s greatest living explorer”.

Daily Telegraph 2000 listed Ranulph Fiennes as “One of the world’s top ten speakers”.

“The entire room was spellbound by your words and adventures, they were truly inspired by you.” – De La Rue

“The presentation was extremely entertaining, witty, inspiring, thought provoking and humbling, the best speaker we have every had and will find it difficult to follow next year.” – Philips

“Sir Ranulph went down a storm. His presentation was amazing (you could hear a pin drop in the room).” – South Stand Conference

“It was clear that everyone was hugely energised following your presentation which was both entertaining and thought-provoking on many levels.” – E-On

”You lead such an inspiring life and not only defy the odds but also ensure that those who need help receive it with the many millions you and your team have raised over the years.” – Londis

“He thrilled and delighted the audience with his gripping stories from his expedition and adventures.” – Chester Festival

“Thank you again for making the evening so memorable, not only for myself but for the 590 people in attendance on the night, the feedback was overwhelmingly positive.” – RICS QS & Construction