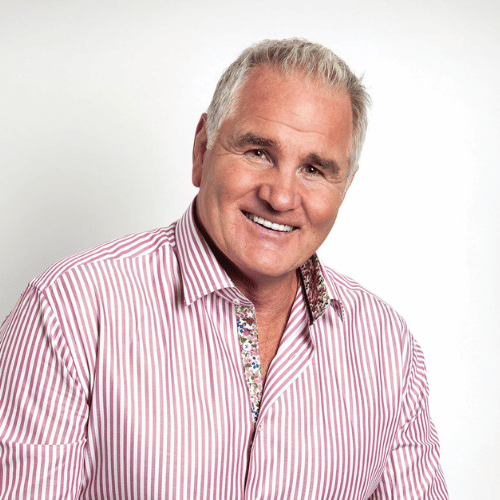 New Zealand born rugby player, coach and TV commentator Brent Pope played rugby with top New Zealand side Otago University before finally settling in Ireland in 1991 and lining out for three seasons with St Marys RFC. Later Brent coached Clontarf RFC for two seasons, leading them to promotion to Division One of the AIL.

Brent has worked for RTÉ Sport for over 15 years and has also appeared in many crossover programmes such as ‘The Restaurant’ (Irish TV series), and in ‘The Den’, ‘The Afternoon Show’, ‘The Hook and Popey Roadshow’, ‘The Late Late Show’, ‘The Saturday Night Show’, and various travel programmes. Brent also starred as a singer in ‘Charity You’re a Star’ in 2007. In 2012 he learned and played the clarinet for the RTÉ reality music show ‘Instrumental’.

He is also the curator of a popular art gallery for mental health artists called The ‘Outside In Art Gallery’, and has a movie script entitled ‘Coming out to Play’ listed with a major movie production company.

Brent is involved in several mental health charities, and is an ambassador for St Patrick’s Hospital ‘Walk in My Shoes’, ‘Cycle Against Suicide’, and RTE’s ‘People Of The Year’.

In his candid autobiography, If You Really Knew Me, Brent Pope talked openly, for the first time ever, about his rugby career and personal life. A ruthless, tough player who “ran like a reverse hovercraft”, Popey’s aggressive, uncompromising style inspired the legendary players around him and the teams he coached. He has also published a series of award winning children’s books for charity.

Brent is a motivational business speaker and his lessons in sport, mental well being, professional life and sport coaching, business acumen and media insight gives him an ideal platform to motivate individuals and businesses alike on achieving their goals and effective management. His years as a rugby player, coach and media pundit, with his stories of the characters in rugby, has allowed him to entertain audiences at corporate and private functions. Brent is also available to MC events.

“I found the talk very beneficial and insightful. I think it was great of Brent to share his story and promote mental health awareness as it’s something that’s so often overlooked. I was glad that Intel asked him to give this talk and I think it was probably the best event for workplace wellness week”

“I really enjoyed the event with Brent Pope. Most of the seminars or workshops that we go to can be quite structured and usually have slides and a format and you can sometimes tell that the presenter has done this many times before. I found Brent to be extremely natural, honest and unrehearsed. This made the event a lot more meaningful which I think was really appropriate for the topic he was discussing. He had a great balance of banter, humour and openness and didn’t seem to mind discussing anything, no matter how personal it was. He didn’t claim to be the solver of problems or that he had the magic answer, he just gave his own experiences and what has helped him“

“I really enjoyed the session. It sparked conversation among the group here on anxiety & depression which I think is a good first step in getting rid of the stigma Brent spoke about. Brent was an entertaining and honest speaker. Also liked his three practical tips for taking care of mental health (offering to help, keeping a gratefulness journal, remembering you have the choice to pursue your goals) -I am trying to take his advice”

“Found Brent to be very open and frank about his journey and health issues. He spoke in a very relaxed informal way which meant it was easy to identify with him”