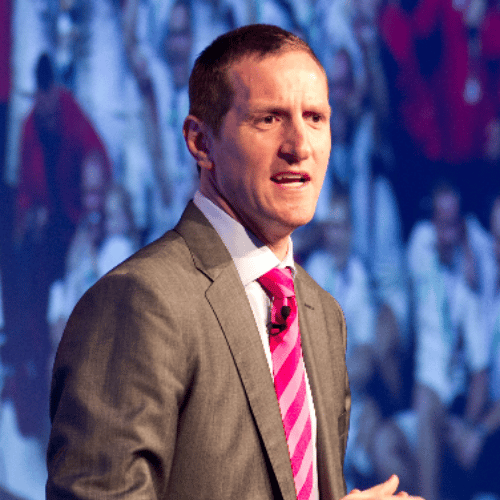 Will Greenwood is not one to shy away from high pressure, highly competitive situations. Having started working life on London’s City trading floor he went on to become the second highest try scorer in English rugby history and helped power England to victory at the Rugby World Cup in 2003. He is widely regarded as one of England’s greatest ever rugby players, as well as one of the sport’s most engaging, intelligent and entertaining characters.

Greenwood made his debut in 1994 for Harlequins, before progressing to Leicester in 1996 and being handed his full England international debut in 1997.  The 2000/01 season saw him establish himself as an England regular under the tutelage of Clive Woodward and accolades swiftly followed. He was awarded man-of-the-match performances in England’s Six Nations victories over Scotland, Wales and Italy in 2002.

Selected for England’s World Cup winning squad in 2003, Greenwood finished the tournament joint top try scorer with five to his name. In 2005, in the culmination of an outstanding career, he finally threw off injury problems to run out for the British & Irish Lions in the 2005 tour of New Zealand.  In total he toured 3 times with Lions, in 1997, 2001 and 2005.

Throughout his 11 years at the top, Will was a dedicated professional combining a fantastic work ethic with a desire to continuously learn and improve his game. Despite injury setbacks and occasional moments of self doubt and personal tragedy his focus, determination and perseverance led him to the top of the national and international game.

Off pitch his focus has remained undimmed.  With a reputation as a bright, articulate and entertaining personality he was snapped up by Sky as a regular match day presenter and fronts the hugely popular ‘School of Hard Knocks’, giving at risk youngsters the chance to train, grow and shine through sport. Alongside this he pens a weekly opinion column for the Saturday Telegraph and is a dedicated supporter of the premature birth charity Borne. Will is also a successful businessman in his own right, having set up Legend Holidays & Events, a company providing family holiday experiences, corporate events and the Sports Fest family sporting festival. His company Sports Show is also set to run the first ever family sports show of its kind, designed to host tens of thousands of visitors at the NEC and inspire kids to play, love and live sport.

A brilliantly funny after dinner speaker, Will can shed light on the more serious lessons learnt from a career in elite sport. As a Durham Economics graduate and former City trader with HSBC he can speak eloquently, intelligently and with real insight about the synergies between high performance in sport and business. He brings with him knowledge and expertise on the following themes:

– Attitude/Confidence: Greatness is achieved through the discipline of attention to detail;

– Change management: From Good to Great

“Another blinding performance, superb. They loved you!! I’ve never experienced such positive feedback about a guest speaker before, from the entire audience, truly memorable.”

“Will spoke at our annual Business Conference and was inspirational. His anecdotes were funny and motivational as well as relevant to our business. Wills’ ability to take key elements of Rugby, for example Leadership, Responsibility, Teamwork  and Trust and help us to draw the comparisons to the business world, provided a memorable and motivational end to our conference that will continue to be referred to by the participants in the coming months. His relaxed and fun style mixed with a clear intellect and strong drive to succeed made for a very thought-provoking and motivational experience. “

“Will was fantastic, everyone loved his speech and the charity auction went down a treat.”

“We all thoroughly enjoyed your talk and the feedback we have received has been excellent. We are still getting letters of thanks and praise so thank you so much for making the event such a success. We will certainly recommend you to others and hope to be able to book you again in the future. “

“Surpassed all expectations. Great relevance to business with emphasis on team ethos and high performance delivered in an innovative enthusiastic and humorous style, which appealed to everyone.”

“It went brilliantly, I was so pleased… wouldn’t hesitate in recommending Will to anyone…”