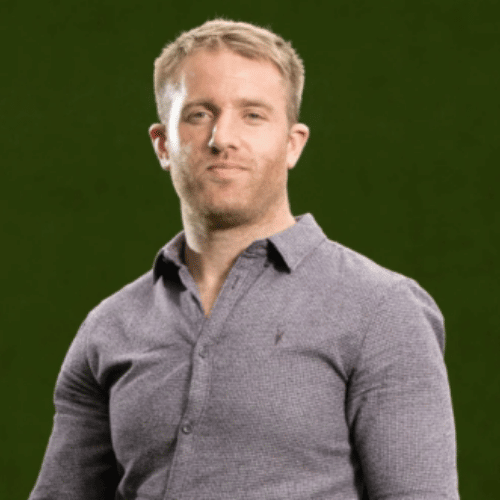 Luke Fitzgerald a  former Leinster, Ireland and British Lions rugby international. He played at winger or fullback for Leinster. He won his first cap for Ireland in November 2006. Fitzgerald earned the nickname “Pivot” from Leinster and Irish rugby fans due to his exciting runs and sidesteps from broken play.

Fitzgerald was named in Ireland’s squad for the Autumn 2006 international series. After a strong performance against the ‘Mid Week Wallabies” playing for Ireland A he won his first cap on 26 November 2006 against the Pacific Islands. In doing so, he became the youngest player to play for Ireland in 29 years. He also became the 999th player to be capped for Ireland.

After much public demand Fitzgerald was given a chance in the centre during Ireland’s match with the Barbarians. He was due to earn a second cap in the centre against the All Blacks. However, he was forced to withdraw from this match due to an ankle injury. He was a member of the victorious Ireland team that won the 2009 Six Nations Championship and Grand Slam where he played on the wing and started every game.

On 21 April 2009, Fitzgerald was named as a member of the British and Irish Lions for the 2009 tour to South Africa and made his test debut on 27 June against South Africa.

On 28 June 2016, Fitzgerald announced his retirement from professional rugby. He had suffered a neck injury in the 2016 Pro12 Final and had been advised to retire on medical grounds. Since retiring Luke has worked as a TV Analyst for Eir Sport and SKY TV.