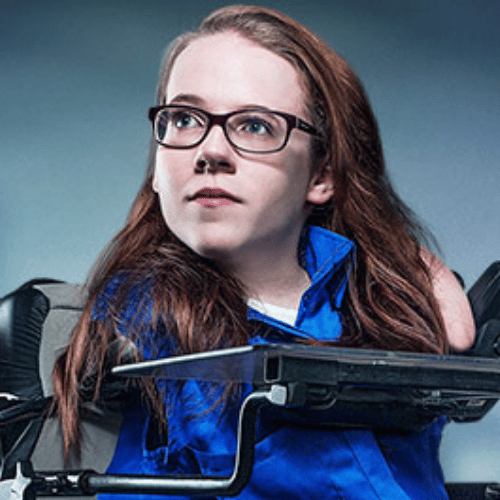 Joanne O’Riordan studied criminology in UCC and is only one of seven people in the world living with a rare physical disability known as Total Amelia. This means she was born without all four limbs and even though there is no medical explanation as to why this happened, Joanne or indeed her family has never allowed it to hold her back.

Joanne first gained attention for skipping school to confront then Taoiseach Enda Kenny about his proposed plan to reduce disability funding during his election. In April 2012, she spoke before the UN and challenged the body to create technology to help disabled people such as herself. She was named Young Person of the Year at the People of the Year awards in 2012. Joanne is an activist for people with disabilities, a motivational speaker and a sports columnist with The Irish Times. She appears in the 2013 documentary No Limbs No Limits.

She has used technology to enhance her abilities in both her education and through the wider social environment. She has conquered enormous challenges at home, in school and around her local community. Joanne adapted her life in such a way that it has given her both national and international acclaim. Joanne is now an example to all able bodied and disabled bodies to live very happy, independent, fulfilled lives.

Joanne has challenged the most advanced minds in the world to build her a robot that would become her hands and legs. The challenges she faces everyday get bigger and far greater to overcome. Joanne is an inspiration to others.