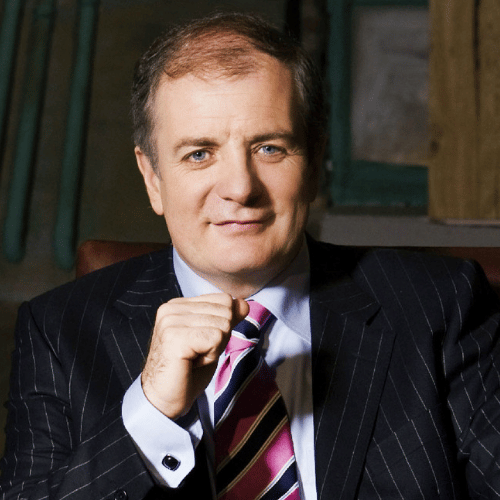 Gavin Duffy is one of Ireland’s top entrepreneurs and most sought after motivational speaker. His witty, engaging and entertaining speaking style is guaranteed to inspire any audience or group.

Gavin is publicly known for his work with entrepreneurs on all seven series of RTE’s Dragons’ Den. However, his true vocation is training. He is a passionate and committed trainer, delivering consultancy, facilitation and coaching through Mediatraining.ie for over twenty-five years. He has coached a number of Taoisigh, and the CEOs and SMT Executives of the leading corporations in Ireland and the UK. He has also delivered training courses and keynotes in the U.S., Australia, and all over Europe.

Gavin’s career in media started at age seventeen, setting-up a local radio station in County Louth. He was the presenter of the first RTÉ television business programme, Marketplace, and two years before that in 1985 was one of the first broadcasters on Morning Ireland on RTE Radio One. Gavin won the franchise for regional radio station LMFM in 1989, later sold to UTV.

A director, investor and shareholder in a number of SME’s at various stages of development and scale, Gavin devotes time to University Enterprise programmes, and has been awarded honorary membership of a number of Enterprise Societies.

Gavin is a founding member of the Irish Chapter of EO, the international Entrepreneur’s Organisation, and is also a member of Ireland’s Public Relations Institute (PRII).

“Gavin is an excellent after-dinner speaker, very positive, uplifting and inspirational. He really engages with the audience and truly entertains by being funny, serious and most importantly, relevant. He was also a pleasure to deal with in the run up to the event and I would highly recommend him.”

“Gavin provides outstanding counsel and tactical advice for organisations or individuals in need of strategic direction.  He excels at facilitation for both intimate groups and larger gatherings and never fails to bring the best out of such events.”

“Gavin, the few hours I spend with you lifted so much of the fog, not to mention the telephone sessions afterwards which were above and beyond your call of duty.”

“When it comes to media he has done it all – presented on TV and radio, written newspaper columns, set up radio stations and for twenty years he has been helping people to do themselves justice on the media. I have been working with Gavin for nearly 12 of those years and he never ceases to amaze me at how insightful he is – no matter what the topic- from online selling, to mining, to egg production for the health market, to recycling batteries! As part of the H&K International network, we also use Gavin for our European clients and we have had fantastic feedback from our colleagues at his ability to train CEO’s and Managers in some of the biggest companies in Europe and some Fortune 500 ones too! His training methods transcend national borders and give our clients the confidence to work under the most difficult conditions.”