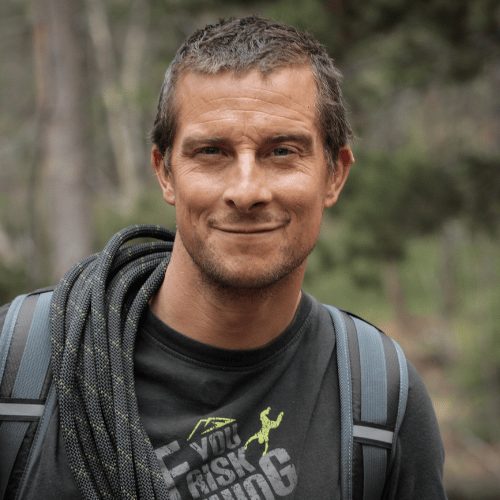 Bear Grylls has become known around the world as one of the most recognized faces of survival and outdoor adventure. His journey to this acclaim started in the UK on the Isle of Wight, where his late father taught him to climb and sail. Trained from a young age in martial arts, Bear went on to spend three years as a soldier in the British Special Forces, serving with 21 SAS. It was here that he perfected many of the skills that his fans all over the world enjoy: watching him pit against mother-nature.

Despite a free-fall parachuting accident in Africa, where he broke his back in three places, and after enduring months in military rehabilitation, Bear became one of the youngest ever climbers to reach the summit of Mount Everest.

He went on to star in the Channel 4 series: Escape to the Legion and seven series of the Discovery Channel’s Emmy nominated TV show Man Vs Wild and Born Survivor, which has become one of the most watched shows on the planet. With an estimated audience of 1.2 billion worldwide, Bear has new major TV series on screen, in production and development in the US and around the world.

Off screen, Bear has lead record-breaking expeditions, from Antarctica to the Arctic, which in turn have raised over $2.5 million for children worldwide. In recognition of his expertise and service, Bear was appointed as the youngest ever Chief Scout to over half a million scouts in the UK, and awarded honorary commissions as a Lieutenant-Commander in the Royal Navy and as a Lieutenant-Colonel in the notoriously tough Royal Marines Commandos.

He has authored 15 books, including the No 1 Bestseller: Mud, Sweat & Tears which was voted the most influential book in China for 2012. Other titles include: A Survival Guide For Life, Born Survivor, Living Wild, Great Outdoor Adventures, Facing Up, Facing the Frozen Ocean, To My Sons and seven children’s fiction novels titled Mission: Survival. His first fiction thriller Ghost Flight was published in June 2015.

Summer 2013 saw Bear’s new US TV series: Get Out Alive with Bear Grylls running on NBC and voted the No 1 new network reality show in the 18-49 age category. The show is currently running worldwide on Discovery Channel alongside a further series: Bear Grylls: Escape from Hell and Bear Grylls: Extreme Survival Caught on Camera.

In 2015 Bear announced his first ever BG adventure TV series produced exclusively for China with Dragon TV and Shanghai Media Group. The first ever Bear Grylls Festival and Survival Race took place in London on 3rd and 4th October 2015.