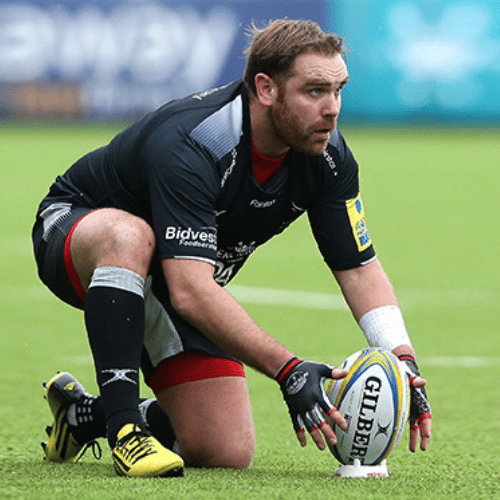 Since retiring at the end of the 15/16 season, Andy has enjoyed a flourishing career as a commentator and analyst for a variety of media outlets. You can see him on BT Sport, Sky Sports, NBC and on the radio with TalkSport. He is also in demand as an after dinner speaker.

He finished his career with legendary status after coming out of a brief retirement spell (which some believe he took to avoid pre-season training) to join Newcastle Falcons for 3 months. His point scoring record is credited with saving the club from relegation. He represented England on 17 occasions, making his debut as a replacement for Charlie Hodgson in the 2005 victory over Italy, in which he also scored his first points from a conversion. He was called up to the England squad for the 2009 Six Nations and was in the starting line-up for the opening match against Italy scoring the opening try and converting it himself.

His career has spanned over 16 years playing for 6 different clubs including Saracens, Leicester Tigers and Wasps RFC and he is currently second in the all-time top point’s scorer list in the Premiership with 2,147 points to his name. He won five Premiership titles and two Heineken Cups in his time at Leicester Tigers before moving to Brive.

After Brive he had a spell with the Sharks in Super Rugby before moving to Wasps where he played a key role in guiding them into the play-offs and to the European Champions Cup quarter finals.

He joined London Irish for the start of the 2015/16 season but never played a game after failing to recover from surgery. He took up his role with Newcastle half way through the 15/16 season.
Andy has a daughter called Ella-Grace and a dog called Meg. He is also a corporate partner at Worldwide Currencies.

Andy is an excellent presenter and after-dinner speaker.