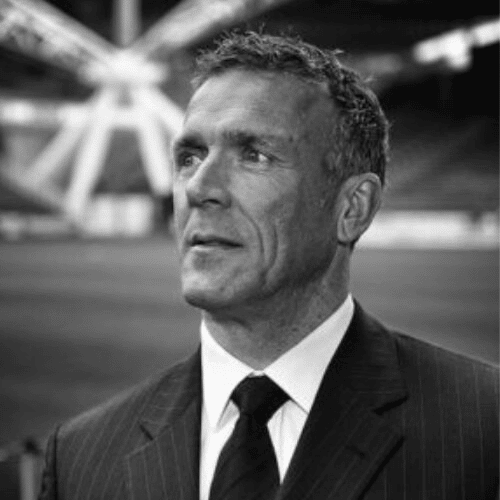 With 118 international caps, Alec Stewart is the most capped English Test cricketer of all time. After 20 years in County and International cricket his final match was a very high profile one at his home ground The Oval against South Africa in the summer of 2003.

Not only is Alec an iconic sporting figure he is a renowned corporate speaker. Alec works as a regular cricket analyst on BBC Radio 5Live and other broadcasters in various roles. He also remains close to Surrey County Cricket Club as their Director of Cricket. He previously was a principle ambassador for Vodafone and their sponsorship with the English cricket team. He has also appeared on Sky 1’s ‘The Match’ and is widely recognised as a very talented footballer who could have had a career in the game. As a keen Chelsea fan he follows them across Europe.

As a regular pundit on cricket shows, a popular player for written and broadcast media, Alec is very comfortable in front of the camera. He is also a natural speaker with confidence and considered delivery. His natural comic timing lends him perfectly to the after dinner circuit and his leadership credentials ensure his corporate speaking package, ‘Leave Nothing To Chance’, offers a useful and enlightening insight into focus, dedication and team motivation, amongst other aspects.

– Most capped test cricketer of all time.

– Awarded OBE for achievement in sport.

Alec is available as an after dinner speaker and host as well as Q&A and motivational speaking.