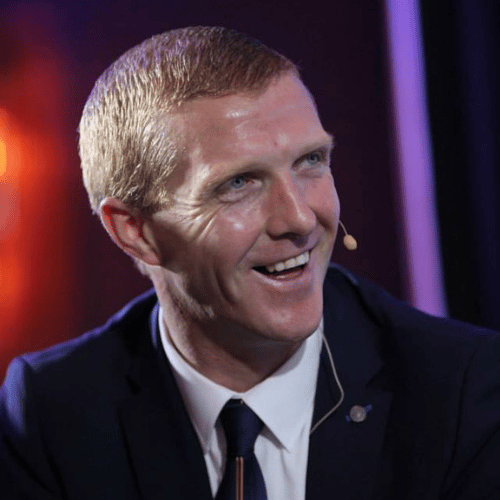 Since the turn of the millennium, when Kilkenny established itself as the dominant force in hurling, one man has stood out from a remarkable group of players: Henry Shefflin. Now widely regarded as the greatest player of all time, Shefflin has eleven All-Stars and a record three Hurler of the Year awards and ten All-Ireland medals – but beneath the surface image of calm efficiency and effortless genius, his hurling life has included its share of bitter disappointments, agonising injuries and intense rivalries.

Henry Shefflin is an Irish hurler who played as a centre-forward for the Kilkenny senior hurling team who speaks about team work and what it takes to be a winner in business and sport.

A native of Ballyhale, County Kilkenny, Shefflin first excelled at hurling whilst at school in St. Kieran’s College. He arrived on the inter-county scene at the age of seventeen when he first linked up with the Kilkenny minor team, before later lining out with the under-21 and intermediate sides.

He made his senior debut during the 1999 league. Shefflin has since gone on to play a key role in the Kilkenny forwards and has won a record ten All-Ireland medals on the field of play as well as thirteen Leinster medals and six National Hurling League medals. An All-Ireland-winning captain in 2007, Shefflin has been an All-Ireland runner-up on three occasions.

As a member of the Leinster inter-provincial team at various times, Shefflin has won three Railway Cup medals. At club level he is a three-time All-Ireland medallist with Ballyhale Shamrocks. He has also won four Leinster medals and six championship medals with the club.

Shefflin’s career tally of 27 goals and 484 points ranks him as the top championship scorer of all-time.

Throughout his career Shefflin has made 71 championship appearances, setting him apart as the second most “capped” player of all-time. He announced his retirement from inter-county hurling on 25 March 2015.

Shefflin is widely regarded as one of the greatest hurlers in the history of the game, with many ranking him as the number one player of all-time. During his playing days he won a record-breaking eleven All-Star Awards, as well as being the only player ever to be named Hurler of the Year on three occasions. He has been repeatedly voted onto teams made up of the sport’s greats, including in 2009 when he was picked on a special Leinster team of the past twenty-five years as well as being named in the top spot on a special list of the 125 greatest hurlers of all-time.