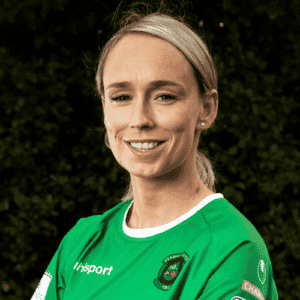 Stephanie, a Shankill native, is a footballer, youth coach, and pundit for RTE. The Ireland WNT
and Peamount United striker has had a decorated career, with 55 caps and 15 international
goals for Ireland. Her incredible Peamount goal went viral in 2013, winning second at the 2014
FIFA Puskas Award for best goal of the year.

Stephanie recently led Peamount United to a league and cup double in the 2020 season, scoring 2 goals in the cup final. She also has her own coaching company, Stephanie Roche FC, where she hosts youth camps and training sessions. Stephanie has become not only an important voice in Ireland recognising the importance of women in sport but also on a world stage.