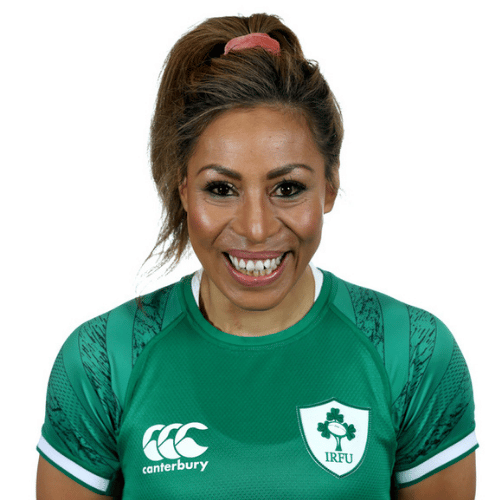 Sene,is an Ireland women’s rugby international, is a force to be reckoned with. The centre from New Zealand has 44 caps for Ireland and 30 Six Nations points. She made her Irish debut in 2015 at the Six Nations Championship, where Ireland secured the title and also represented Ireland at the 2017 Women’s Rugby World Cup.

Sene is one of a number of players in the Ireland Women’s programme who has represented Ireland in both 7s and 15s.Sene is much more than her continuing impressive rugby career as she has led sport strategies for national governing bodies, both inside and outside rugby, Olympic federations and broadcasters.

Sene has made it her mission to ensure the ongoing success of Irish rugby throughout her work. As a champion of equal opportunity in sport and business, she also works with global brands to promote the visibility of women and sport. In 2020 she was appointed to the governing body’s Women’s Advisory committee. She specialises in research and strategy, completing a masters thesis from UCD, on emergent models in the development and delivery of women’s rugby.

Recently, Sene has become Head of Strategic Projects and Research at International Rugby Players. In 2017 the Irish Times named her among Irelands’ 30 Most Influential Women’ and, in 2020, the Irish Examiner named her the 10th Most Influential Women in Irish Sport. In 2016 she was named the Guinness Rugby Writers Women’s Player of the Year and the IRUPA Women’s Player of the Year. Sene has an infectiously positive personality, experience in broadcasting and speaking engagements and also has a large and engaged audience on social media.