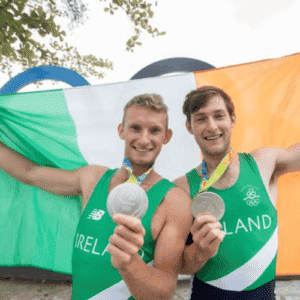 Irish Olympic Rowers Paul and Gary O’Donovan may be one of the world’s most well known rowing double acts. The brothers from Skibbereen stunned the world at Rio 2016 by winning Ireland’s first ever Olympic rowing medal.

Their success continued on in 2017. The brothers won silver in the men’s lightweight double sculls at the European Rowing Championships in May 2017. They also won silver at the second World Rowing Cup regatta of the season in Poland in June, and bronze at the third in July.

At the 2018 European Championships in Glasgow, the Irish Olympic Rowers won silver in the lightweight double sculls, and later became world champions in the same event at the 2018 World Rowing Championships .

The brothers have become household personalities not just for their achievements but the down-to-earth personas that break the mould when it comes to sporting interviews and demeanours. The Irish Olympic Rowers appeared on the Graham Norton show where they enraptured the audience with their quick wit, cracking stories and one liners.