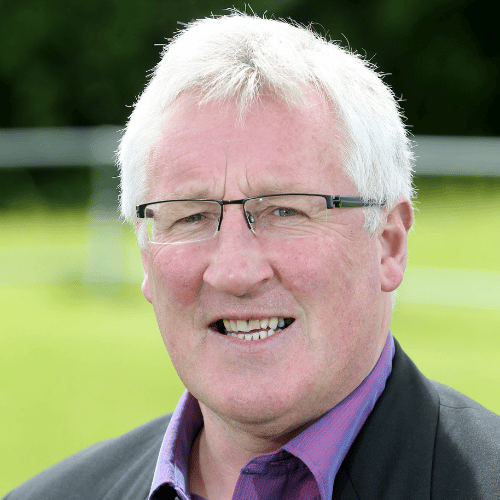 Pat Spillane is a retired Gaelic footballer and well known Irish sports personality. He played with his local club Templenoe and was a member of the Kerry senior inter-county team from 1975 until 1991. Pat Spillane is regarded as one of the greatest players of all-time. He has also been regarded a leader throughout his life – on the sporting field where he won 9 All-Star awards, in his professional life as a school principal and in his media career.

Following retirement from Gaelic football, Spillane developed a career in the media. He joined the Sunday Game team as a co-commentator in 1992 before later working as a studio analyst. As an analyst of games he was often criticised for his controversial views, particularly in 2003 when he described Armagh’s and Tyrone’s style of defence as ‘puke football.’

He presented the Sunday Game highlights programme during the summer months until 2009. That year Pat was replaced by Des Cahill and he return to his familiar analyse’s seat. He writes a weekly column in the Sunday World newspaper.

Won 8 All Ireland titles with Kerry, and a joint record of 9 All-Star awards. He also has 12 Munster medals.

Won his first All-Ireland senior football medal in 1975 at the age of 19. As team captain Mickey Ned O’Sullivan had gone off injured in the first half, Spillane lifted Sam Maguire.

Named on GAA Football “Team of the Millennium”, and appeared on a stamp to commemorate the team.

Retired from GAA in 1991 having lost to Down in an All-Ireland semi-final, before beginning work as a pundit with RTÉ.

Pat represented Ireland against Australia in International Rules series in 1986 & 1987.

Pat Spillane’s reputation makes him a much sought after public speaker. He is an excellent choice of speaker both in the sports and business circuits.