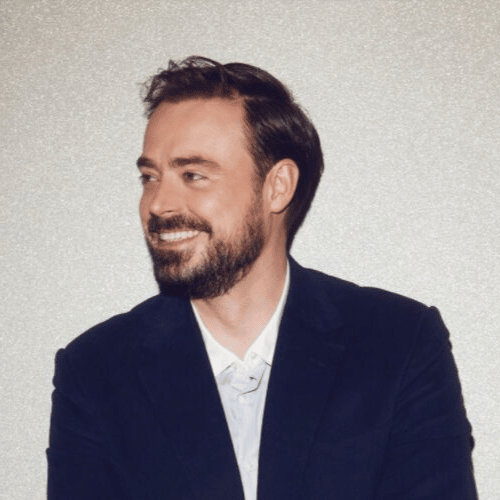 A respected TV and radio presenter, Jamie Theakston became a household name in Britain thanks to roles on mainstream terrestrial shows such as Live & Kicking, Top of the Pops and, more recently, through his presenting work on Heart FM. Jamie’s career kicked off after he teamed up with co-presenter Zoe Ball in September 1996 on the brash new Saturday morning show Live & Kicking on BBC1. It was an instant success, earning a BAFTA award and generating double the amount of viewers of any other Saturday morning show.

After 3 fantastic years, Jamie decided to move forward and explore other projects. He landed his first main TV presenting role on BBC2’s The Ozone in 1999, after acting as a regular host on iconic BBC1 show Top of the Pops in 1998, which saw him interview stars such as Madonna, David Bowie, Tina Turner, Oasis and the Spice Girls. 1999/2000 also saw Jamie play himself in two series of the mock-interview show Rock Profile for UK Play, in which he interviewed “celebrities” impersonated by Matt Lucas and David Walliams. This also led him to appear alongside Lucas and Walliams in an episode of the much acclaimed BBC1 series Little Britain.

Jamie quickly became a key anchor for the BBC, presenting their coverage of the much hyped lunar eclipse in 1999, fronting the top-rating Saturday night quiz show A Question Of Pop, hosting coverage of Glastonbury and presenting The Millennium. In 2000, Jamie was approached by Channel 4 to co-host The Priory with Zoe Ball, produced by Chris Evans’ then production company Ginger Productions. Jamie and Zoe went on to present 3 successful series of the show, further cementing his reputation as one of the UK’s best live TV presenters.

After being invited to launch a weekly two hour radio show on Radio 1 in 2000, Jamie’s radio presence developed further in 2001 as he undertook his first regular sports show for BBC Radio Five Live, quickly gaining high acclaim from The Daily Telegraph who documented “This is the man who has made cricket hip”. Simultaneously, Jamie continued to add to his huge portfolio of TV work with Channel 4’s ratings winner 100 Greatest Kids Shows, as well as hosting Natural Born Losers and the holiday show You Call The Shots, both for BBC1.

Stage success soon followed in 2002, with Jamie taking on the lead role of ‘Serge’ in Yasmin Reza’s smash hit play Art, produced by Sean Connery. Taking on a role previously performed by such theatrical luminaries as Tom Courtney, Nigel Havers and Art Malik, Jamie attracted widespread acclaim for his assured performance. His second theatre project soon followed – playing Frederick Lowndes in Somerset Maugham’s comedy drama Home and Beauty at the Lyric Theatre, London which also received rave reviews. This was the resurgence of a long-held interest for Jamie – he was a member of the National Youth Theater in his teens until he put aside thoughts of drama school to undertake a Business Studies degree. More acting offers followed, including a guest appearance in the highly rated BBC1 comedy drama Linda Green and, in 2003, Jamie undertook his first major acting role in BBC1’s Murder in Mind. His love of film also saw him host Sky’s live coverage of the Oscars.

From 2003 – 2006, Jamie presented four series of The Games for Channel 4, a reality television show which saw a number of celebrities compete against in each other in Olympic style events. 2007 saw The Search air on Channel 4, a game show conceived, produced and presented by Jamie, in which contestants with unique skills had to solve a variety of ancient clues and puzzles from throughout history. That year also saw Jamie present BBC1’s coverage of the Princess Diana Memorial Concert, Sport Relief and The People’s Quiz.

In September 2008, he joined World Cup legends and other top celebrities for Soccer Aid at Wembley Stadium, in aid of UNICEF and its partners. In October 2009, he returned to our TV screens alongside Zoe Ball to host the brand new prime-time series Britain’s Best Brain for Channel Five. Jamie featured on Celebrity Pointless alongside Jayne Middlemiss on BBC1 in December 2012, successfully winning the show. He also returned to the England team to take part in Soccer Aid 2012, helping them secure victory over the “Rest of the World” team.

In 2010/2011, Jamie teamed up with Activia for a series of TV adverts to promote their latest product, a pouring yogurt. In the later stages of 2011 Jamie featured in The South African Tourism Board’s latest campaign which meant he took a “trip of a lifetime” to the country. This was a personal journey to highlight the main attractions and was part of a nationwide PR campaign. Throughout 2011, Jamie practised his tennis skills as part of the LTA’s “All Play” scheme to encourage more people in the UK to pick up a racket and play the game. In 2013, Jamie teamed up with Ibis Hotels to launch their new sleep art phone app highlighting the importance of a good night’s sleep and he continues to be an ambassador of Disney’s 2013/2014 Winnie the Pooh Storytelling competition to find the UK’s best storytellers.

2018 has seen Jamie film his fifth series of Forbidden History for the Yesterday Channel , which he has fronted since 2013 to wide acclaim. The programme uncovers the truth behind great historical myths, conspiracy theories, ancient treasures, lost civilisations and war time secrets.

Jamie also returned as the presenter for Channel 5’s latest police series, Traffic Cops . The show has consistently been one of the most watched factual series on UK television.  Jamie’s long established relationship with Heart 106.2 FM began in 2005, when he started co-hosting the station’s flagship breakfast show alongside Harriet Scott. He continues to present the hugely popular weekday breakfast slot to date, with new co-presenter Emma Bunton. Jamie and Emma spent the summer of 2013 presenting ITV’s This Morning, which was the perfect extension to their early mornings and really cemented them as the faces of breakfast and daytime.

Jamie lives with his wife and two sons in West London and has a keen interest in property and interior design, regularly renovating his properties.

– Much loved and respected TV and radio presenter

Jamie is available as a host.

To book Jamie Theakston for your event, contact Front Row Speakers on +353 1 485 3991 or email welcome@frontrowspeakers.com