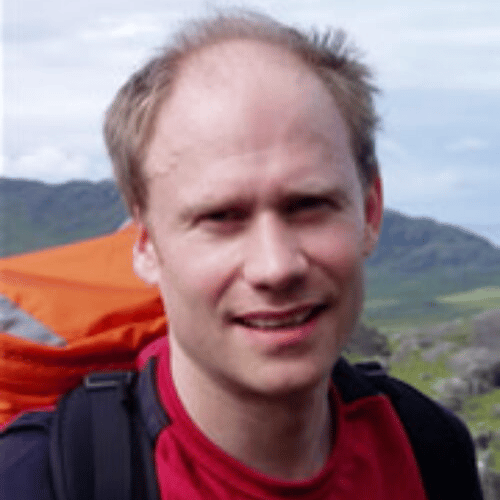 Jamie Andrew is an astonishing individual. An unassuming hero who describes himself as an ordinary guy who just happens to have gone through extraordinary events. In 1999 he survived for five days perched precariously on an icy ledge at the summit of an Alpine mountain while winds raged to 130 km per hour, and temperatures plummeted to minus 30 degrees Celsius. Despite hypothermia and severe frostbite, Jamie was still conscious as he was snatched from the ledge by the French Mountain Rescue Services in a daring and spectacular rescue that arrived tragically only hours too late to save his climbing partner.

Jamie survived the ordeal, but at great personal cost. Ten days later his hands and his feet, damaged beyond repair by the frostbite, were amputated. Many, including some of the medical staff who had fought so hard to save him, felt that this was a fate worse than death.

Amazingly, three months later Jamie emerged from hospital, walking on prosthetic legs, having once again learnt to manage everyday tasks such as feeding, washing and dressing.

Jamie then defied all expectations by learning to ski, snowboard, sail and paraglide, running the London Marathon, and returning to climb once again in the mountains that he loves so much. He has since run more marathons, completed Iron Man triathlons and climbed many challenging mountains around the world, raising tens of thousands of pounds for charity in the process. In 2012 he was awarded the OBE for services to charity. His humble and unassuming manner, coupled with an unshakeable positive attitude towards life and its challenges make Jamie an extraordinary example of bravery and determination.

Jamie is an inspired and gifted speaker and delivers lectures, keynote addresses and after dinner speeches to a wide array of audiences. He speaks with unpretentious modesty yet manages to move and inspire his listeners across the board. Telling his story with great passion, sincerity and humor, the result is a talk which is at once gripping, inspiring and ultimately uplifting.

Jamie’s presentations have proved hugely valuable in the business arena. He uses his experiences to great effect in putting across many key business messages. Drawing on his skills as a mountaineer, the challenge he faced on losing his hands and feet, and the strength he found within himself in rebuilding his life, Jamie covers a wealth of material that is directly applicable to successful business practice. Topics which Jamie covers in his presentations include:

Leadership – taking control and having the vision to motivate and inspire others.

Change Management – learning to value change and the opportunities it creates.

Motivation – focusing on the positive, achieving results and staying motivated.

Resilience – coping with setbacks, learning from mistakes, and moving forward.

Teamwork – working with the strengths, working round the weaknesses.

Accepting Challenge – learning to see the difficulties we face as opportunities rather than obstacles.

With over ten years’ experience, speaking in more than 30 countries on 5 continents, Jamie has worked with many businesses and training organisations, including Toyota Motor Sales, TetraPak, Accenture, The International Institute of Management Development, The Leadership Trust, Microsoft, China Development Bank, The Institute of Chartered Accountants and Vodafone. References available on request.

Jamie also does a lot of work with schools, telling his inspirational story, as well as working on various projects with smaller groups of pupils. His input never fails to illicit a positive response from even the most sceptical of teenagers and Jamie firmly believes that having good outside speakers into a school can make a big difference in terms of showing the kids that there’s more to life than the four walls of school, classes and exams, and inspiring them to go on and achieve their potential.

Jamie’s award winning first book, Life and Limb, which tells the tale of this remarkable man, is available from LittleBrown, and copies may be made available to audiences and course delegates at a special rate by arrangement with Jamie.

“The impact it had on all present, including myself, was profound”

“Jamie is a speaker who will inspire and move any audience, a truly remarkable achiever and human being”

“People really valued what you brought to us – and the messages have stuck – so THANK YOU!” Susan Goldsworthy, Tetra Pak

“Jamie did a fabulous job today. It was an extraordinary experience to meet him and hear his story. I had feedback from many of the people who attended, and everyone was inspired by his positive approach, his sense of humour, and his courage… Thanks so much for introducing him to us. He really made a difference.” Jane Beseda, Toyota Motor Sales