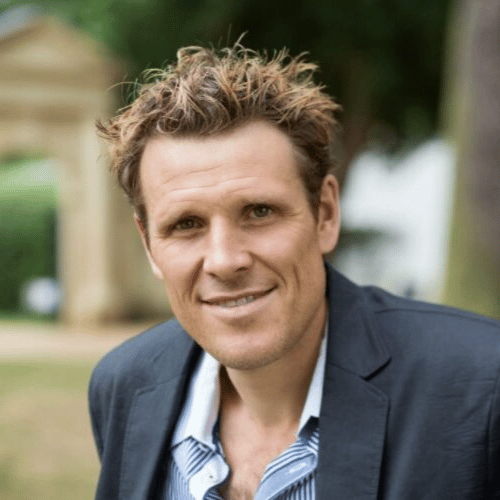 In 2010, James Cracknell took on America- racing to cycle, run, row and swim from LA to New York in record time. It was during this trip that James suffered a near fatal accident after being struck from behind by a truck while cycling through Arizona. After a difficult six-month recovery period, James went to the Canadian Yukon, completing The Coldest Race on Earth. These stunning adventures transmitted as ‘Unstoppable: The James Cracknell Trilogy’ on Discovery.

Following this, James’s did a series for Discovery in 2012, ‘Worlds Toughest Expeditions’. The series sees James pushing himself to the limit of endurance. James has also successfully completed the gruelling Amundsen Omega3 South Pole Race with friend Ben Fogle and Dr Ed Coats and The race across The Atlantic, again with Ben Fogle . Both journeys were aired on the BBC and were accompanied by the books, Race to the Pole (MacMillan) and The Crossing.

James’ recent programming saw him and Ben cross the Empty Quarter on camelback, which aired on the BBC in 2013, Ben & James Versus the Arabian Desert. James is Vice President of the Charity ‘Headway’ and has been appointed to lead Policy Exchange work on obesity and physical activity.

Alongside this, James also starred in ITV’s new sports-science programme Eternal Glory , in which he competed against other former athletes and sports stars, showcasing his outstanding mental and physical dedication by making the final of the competition. Additionally, James is the BBC’s commentator for Rowing, and was heavily involved in the coverage for the Rio Olympics in 2016.

James has held ambassadorial roles for brands across a wide range of industries. In 2016, he partnered with American Express. Drawing on the brand’s 100 years of travel experience, the campaign will uncover the travel adventures and destinations that can be enjoyed by every generation; inspiring consumers with the exciting and adventurous travel opportunities that families can enjoy. He has also had partnerships with JML as the ambassador for Nutriblitzer and Awesome Gym , worked on the Dove Men + Care
Father’s Day campaign and faced campaigns for Karrimor and Biosynergy.

The same year, James was announced as the long-term ambassador for Renault. He supported Renault-featured events throughout the UK, including Men’s Health magazine’s Survival of the Fittest races. In one of the first showings of this partnership, James filmed several daring idents with the Renault Kadjar around Snowdonia National Park, Wales, which aired on the Discovery Channel . He also has announced a long-term partnership with the Great West Run, the longrunning and popular half-marathon staged annually in the heart of Exeter and the surrounding countryside.

James is a keen marathon runner, completing many marathons for chosen charities including the London Marathon in 2015, 2016 and 2017. In 2017 he broke his marathon PB, running an impressive 2:43:12

James is leading the Policy Exchange’s work on obesity and physical activity and has been heavily involved in their report calling for sugary drinks to be taxed as part of a series of measures to combat rising levels of obesity. Following this, James appeared in
The Secret Plan to Save Fat Britain : Channel 4 Dispatches .

In 2019 James made history when he became the oldest competitor in the Boat Race, winning alongside his Cambridge teammates

When not crossing oceans and continents, James is in demand as an entertaining corporate, motivational and after dinner speaker. Not to mention training for marathons, the Great North Run and many other races in the UK.

– Skied/trekked to the South Pole

– Swam the Straits of Gibraltar

– Represented Great Britain in triathlon at the European Championships

– Represented Great Britain in duathlon at the World Championships

James is available for after dinner and motivational speaking as well as hosting.

To book James Cracknell for your event, contact Front Row Speakers on +353 1 485 3991 or email welcome@frontrowspeakers.com