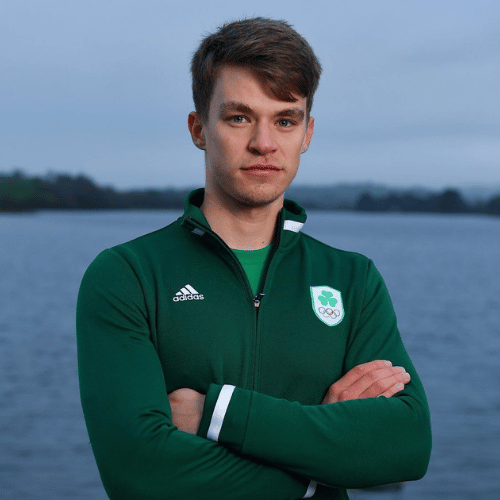 From Skibbereen, Co. Cork Fintan is a lightweight rower with an impressive resume.
Fintan spent 4 years competing on the National team between 2015-18 and competed at the
U23 and Senior World Championship Finals. He won his first national title in 2016 with his twin brother Jake, who is also a championship rower.

In 2019, the same year Fintan completed his final year full time degree, Fintan and Paul O’Donovan were partnered in the men’s lightweight double sculls at the World Championships, where they went on to win gold. From there, the pair won gold at the European Championships, the World Rowing Cup II Regatta, and the 2020Tokyo Olympics, becoming Ireland’s first ever team gold medalists.

After him and PaulO’Donovan’s historic gold medal performance at the Olympics, the pair went on to be the first Irish boat to win the Henley Regatta in the UK. Fintan also won bronze in the 2020 European championship in the men’s single sculls. Fintan has a Physiology degree from UCC and is now pursuing a research masters while continuing to train. In his spare time, Fintan likes to help out with training and coaching at his rowing club in Skibbereen.

He immerses himself in overall health and wellness, by always finding new ways to innovate and improve his training to improve his performance in the boat.