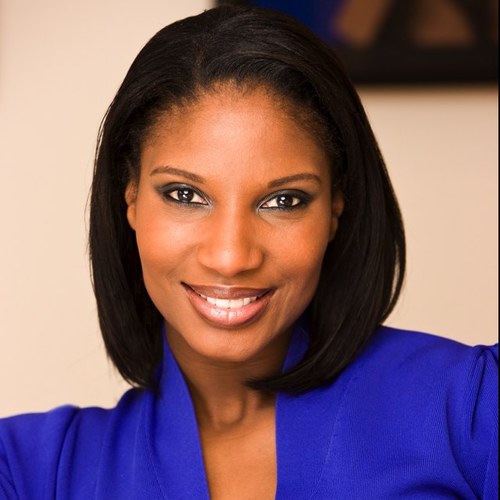 Denise Lewis has bounded into 2015 with a stint on the red sofas, co-presenting BBC’s The One Show, following the huge success of her episode of BBC’s Operation Meet the Street.

2014 also saw Denise move away from the track and present one of the vignettes in Seven Wonders of the Commonwealth for BBC1. For the documentary Denise travelled to Zambia to report on the spectacular sight of the awe-inspiring Victoria Falls. The adventure moved Denise on an otherworldly level, and she acquired memories that will stay with her forever. Many reviews highlighted Denise as the stand out presenter of the documentary.

2014 was a busy year for Denise and saw her cover many key athletics meets for the BBC including the Commonwealth Games in Glasgow, as well as the European Diamond League and the London Marathon. Denise now looks ahead to the IAAF World Athletics Championships this year and the Rio Olympics in 2016.

Denise also competed in the wheelchair basketball event at the 2014 Invictus Games; an international sporting event for wounded, injured and sick Servicemen and women. The Games are supported by Prince Harry and the game played out live on BBC’s The One Show. Other guest slots have included Sky Sportswomen and the ever popular Celebrity Squares.

Denise was also an ambassador for last year’s Telegraph Be:Fit event; a female-skewed health and fitness convention in the heart of London. 2015 sees Denise reprieve her role as the events ambassador.

Denise is a retired British heptathlete who won gold at the 2000 Sydney Olympics. Alongside Kelly Holmes, Paula Radcliffe and Christine Ohuruogu, Denise is one of the “golden girls” of British athletics having established the British record of 6831 in 2000 and has twice, in 1998 and 2000, been runner up in the BBC’s Sports Personality of the Year awards. She was inducted into the UK Athletics Hall of Fame in 2011.

2012 saw Denise cement her position as an authority on the discipline. Not only did she carry the Olympic Flame on its Torch Relay across the UK, having been nominated by the British Olympic Association, but Denise joined the BBC’s London 2012 broadcasting team. Denise worked across the Olympic trials in the run up to the Games and was broadcasting daily from the Olympic Park throughout.

Since retiring from athletics, Denise has undertaken various television and media work, partnering Ian Waite for BBC One’s Strictly Come Dancing in which she came runner-up to actress Jill Halfpenny. Performances at the Royal Variety Show and Strictly Come Dancing Champion of Champions Special followed, where Denise received the most points from the judges and she again revisited the role for Let’s Dance for Comic Relief in

2009, reaching the final of the competition. Denise has been a guest on Radio 4’s prestigious Desert Island Discs and competed for charity on The Cube, All Star Family Fortunes and BBC One’s Pointless.

In spring 2012, Denise undertook the gruelling challenge of rowing the Channel with John Bishop, Davina McCall and Andrew Flintoff for Bishop’s Week of Hell, an impressive feat that raised £3.4 million for Sport Relief. She again joined Davina for another formidable cycling challenge for Sport Relief in 2014.

Denise’s professionalism, natural presence and genuine warmth has established her as a popular anchor and presenter, and in 2011/2012 she presented two series of Camp Orange for kid’s channel Nickelodeon. In July 2012, Denise joined Dame Mary Peters for her BBC NI documentary The Run of Her Life and that autumn saw her anchor the Woman of the Year awards strand for ITV1’s Lorraine show.

Denise is President of SPARKS children’s charity. Charitable work is close to Denise’s heart and she works closely with the Jaguar Academy of Sport, Breast Cancer Care, Unicef as both Patron and Ambassador.

– Runner up in Strictly Come Dancing

Denise is available as an event host as well as after dinner and motivational speaking.

To book Denise Lewis for your event, contact Front Row Speakers on +353 1 485 3991 or email welcome@frontrowspeakers.com